When compared to most other residential electrical and electronic equipment the major household appliances category is unique in that a long-standing and highly effective market-driven recycling system already exists. This market-driven system exists largely because end-of-life (EoL) major household appliances, unlike most other EoL electronic or electrical equipment, can actually have a positive financial value at end-of-life if efficiently collected and processed.

This positive financial value characteristic, which is driven by the metal value in the products, has given rise to a diverse market-driven collection and recycling system comprised of appliance retailers and their contracted service providers, scrap metal dealers, municipalities, metal recyclers and steel mills. This system has operated for decades and has proven itself to be flexible and adaptable to changing market conditions as well as highly effective in terms of its collection and diversion performance.

EoL major appliances are generally processed with automotive and industrial metals and delivered from small pre-processors to mid/large-scale processors and finally to end-markets for conversion into new products. Through fundamental supply/demand economics, this reverse logistics system achieves internationally leading efficacy in the absence of regulatory imposition or industry intervention.

Industry studies have determined that EoL major appliance stakeholders across Canada and North America can be separated into four main groups, based on their function within the handling chain. In some cases, a stakeholder may fill more than one role.  General stakeholder groups by function include: 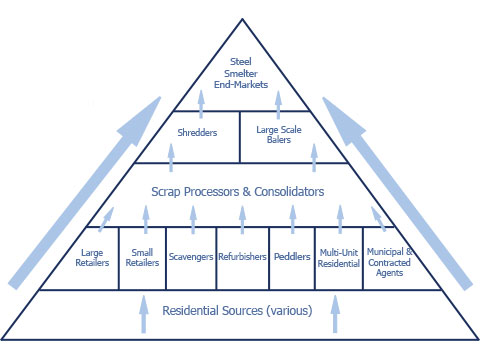 Industry studies have confirmed that the collection and diversion performance of the existing major appliances recycling system in Canada and the United States places these systems among the most successful in the world. These studies have found the overall collection rate to lie between 95% and 99% of all EoL major appliances entering the waste stream and the rate of material diversion from landfill has been found to lie between 83% and 89%. These performance measures are significantly higher than either the EU (approximately 40%) or Japan (approximately 50%) where traditional as opposed to market-based EPR systems for major appliances currently operate.